This thread: Foreman install 2.5, HTTP: attempt to connect to 127.0.0.1:3000 (127.0.0.1) failed started getting lost on these issues so creating a new thread to report on performance issues we are seeing with Foreman 2.5.3. After some troubles getting Foreman 2.5.3 running (see linked thread) we’ve seen dramatic memory usage compared to 2.2. We’ve upped the memory on a couple of VMs running Foreman in various environments without much change. I’ve attached some performance graphs on what we are seeing. We have a server running the default cluster mode, one running single mode, and one running single mode with the max/min threads set to 15. In all cases we see the gradual loss of available memory to the point the boxes start swapping, and restarting the container recovers the memory, which then continues it’s gradual decline.

In the first attachement, 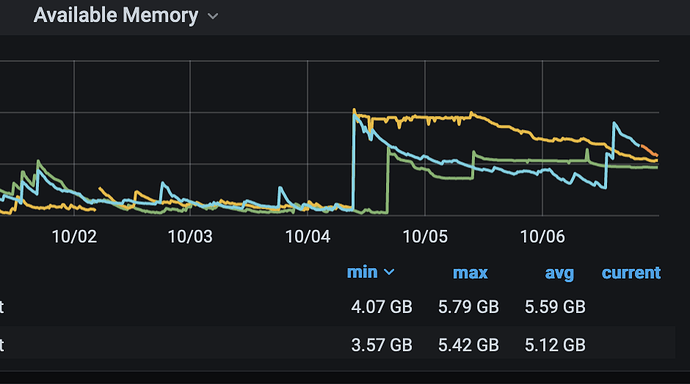 The blueish line is a box that is just running the default configuration, we upped it’s memory as well but it just creeps down until it’s restarted.

The Green line was a box that was running the min/max threads set to 15 and single mode, but we ran into an issue where if we hit the box with more than 6 threads at a time doing a VM sync, it would spin up 130 http threads, and all of them would time out eventually and nothing would get synced. If I run just 6 threads against that box it would work mostly, but I’d still get 12 timeouts and about 30+ http threads, vs the two other boxes that would sit at 24 http threads and could process all the api calls (this was all done via api calls)

I’ve included my proxypass settings as thats what I’ve been messing with, as well as my two Foreman ENV settings:

I had to include the keepalive and timeout as building into EC2 to run the finish script would timeout before it could finish. I am unsure on the retry setting.

To run in single mode I specify:

Before running. And to specify the workers min/max threads

As this is impacting our production environments, going to roll those back to 2.2 to maintain stability, but we do have 2 test environments we can run whatever we need and continue to gather metrics.

We’ve identified Bug #33640: Improve caching of SettingRegistry#load_values - Foreman and it’s already cherry picked to what will be Foreman 3.0.1. The pick to 2.5.4 has some code conflicts so it needs a bit more attention, but I’ve set the target version.

@Jonathon_Turel has opened a PR:

<!--- Thank you for contributing to The Foreman, please read the [following …guide](https://www.theforeman.org/contribute.html), in short: * [Create an issue](https://projects.theforeman.org/projects/foreman/issues) * Reference the issue via `Fixes #1234` in the commit message * Prefer present-tense, imperative-style commit messages * Mark all strings for translation, see [1] * Suggest prerequisites for testing and testing scenarios following example above. * Prepend `[WIP]` for work in progress to prevent bots from triggering actions * Be patient, we will do our best to take a look as soon as we can * Explain the purpose of the PR, attach screenshots if applicable * List all prerequisites for testing (e.g. VMware cluster, two smart proxies...) * Reviewers often use extensive list of items to check, have a look prior submitting [2] * Be nice and respectful 1: https://projects.theforeman.org/projects/foreman/wiki/Translating#Translating-for-developers 2: https://github.com/theforeman/foreman/blob/develop/developer_docs/pr_review.asciidoc -->

You can try to apply it manually: https://github.com/theforeman/foreman/pull/8834.patch and see if it improves things. Graphs from real environments are very useful and welcome here.

pulled the .rb file and re-ran a build. In the attachement the spike up is when I rolled the change ( the container restarted with the change) and everything after has been the instance running with this rb file. Ran a bunch of sync settings through the api (VMs, settings, compute resources, provision templates etc) It’s for sure a different behavior, where before the patched .rb file it was a steady decline of memory, this is much more up and down around the 5.59 GB range. It does take a day or two to really see a trend, but thought I’d add this here as an update.

Zoomed out the metric a bit to the last 6 hours and it’s pretty solid so far:

That’s a nice result. Thank you for sharing!

Yesterday Foreman seemed to lock up / stop responding to all http requests. Unable to hit it via api or via the web UI with errors in the foreman-ssl_access_ssl.log like:

The httpd processes would also start climbing when hitting it with either api calls or the ui, spinning up more and more http processes but not responding / returning any traffic. I restarted the process (you can see the bump in memory where it spikes up then goes down again) and it didn’t quite recover all the memory back. About a couple of hours later it’s locked up again, with httpd processes climbing with each request but nothing making it out of Foreman and the logs just repeating those 503 errors.

I will restart it again today but it doesn’t look like foreman can run more than a few hours without totally locking up.

Though I’m not running the same kind of config.

We saw the same issues and for us they went away when we switched from TCP to a unix socket between httpd and Puma.

I seem unable to start this using a unix socket. I have the socket on disk, and it appears to be the correct permissions, but instead I just get:

with the proxy pass configured as:

The socket on disk setup:

I’ve tried a couple of different permissions and users, but this is pretty permissive as is.

How do you setup and configure your Foreman? Our installer and the underlying puppet module will configure all of this with the right setup for you. If you are doing this by hand, I think we’d need to see the permissions on the socket, and the systemd configuration for the foreman.service as well to try to compare it to how a system installed by the installer sets it all up.

Well the good news is I was able to get this to bind on the sock. I reverted my changes to the proxy pass, so that they have the

in both the ssl and non ssl configs (/etc/httpd/conf.d/05-foreman(-ssl).conf )

Then starting the puma with:

And that got it up and bound to the socket file. now to just run it for a day, ensure that I don’t see those auth timeout issues and monitor the memory consumption (as this still has the patched .rd file in it’s config)

Well after about 3 days, the httpd process stops working. Checked it this morning and it had 253 httpd processes spun up, and the Web UI was unresponsive with

In the logs getting repeated for a while. Had to kill the puma and httpd proccesses to get it to recover.
This is with it running against the unix socket file for puma and apache. The memory profile looks fine, so I don’t think it’s that:

While it’s still going down, it mostly stabilizes, and still has plenty of memory to work with (over 5GB) where as before the patched ruby file it would drop to the 100MB of free and a whole lot of swap.