Hey, all!
As a part of the UXD team at Red Hat, I’m working on a redesign of the Host detail page. Like many times before we need your feedback to design the best experience for you.
This time we would like to dig deeper into the importance of host status/ host sub-statuses and pick your brain about this topic.

We would be very grateful if you could spare a few minutes (3-5 mins) and fill out the following questionnaire:

Thank you very much for sharing your th.

Happy to see surveys like this one,
It can really help us improve the app

I tried to answer with a mix of best practices I tell my customers and how they act in reality. I hope it helps!

Does the redesign specifically address the host details page or also the host overview page?

Done with the survey, thank you for your hard work.

It addresses the Host detail page (finally content host and host pages are being combined). We created an extra Overview tab inside the Host with the most important cards such as Recent Jobs, crucial host details, and also a status card with aggregated sub-statuses.

The outcome of the survey will affect our understanding of how you guys use statuses and your preferences. It will mainly be seen in a modal where you can manage your sub-statuses.
This is still a draft of the overview tab - you can see also a status card: 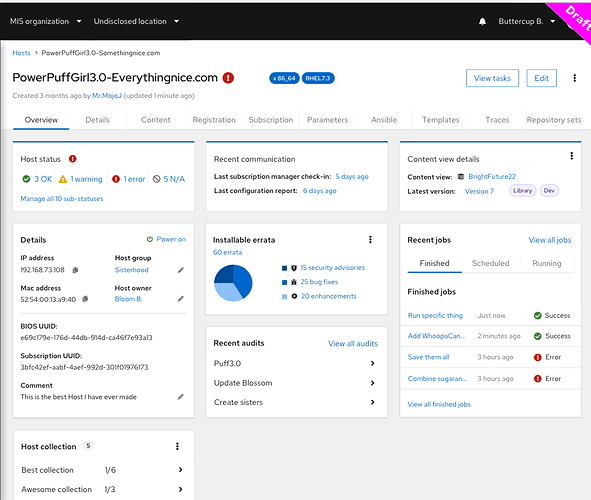 Not sure about all details because I think I have to “feel” it in action myself for a while, but having one combined view is something I am waiting for for a long time and if the “x86_64” and “RHEL7.3” is some kind of tagging I think this can be a very useful feature.

. How do you expect this tagging feature to work? What would be useful for you?

At the moment we have many information in Foreman which are helpful for searches and with this for running job execution, reporting, etc., but all of them feel very static and sometimes it depends on a feature like host collections which are only available in Katello or puppet classes. From having some tagging mechanism I do not expect much more in functionality but simply more flexibility as this is something I really like in an interface (especially compared to ever-growing static lists you have to structure yourself like in many other tools).

I was wondering if it’s possible to customize columns on the ‘all hosts’ page as follows:

I like the redesign & I love the small clipboards to copy values!

So you mean a modernized version of GitHub - theforeman/foreman_column_view: A simple Foreman plugin showcasing Deface for altering the Hosts view?
If yes, this is something I also asked for when talks about the capabilities of patternfly started, so I second this!

Changing the index page is definitely a long-requested feature, but it is outside the scope of the current effort, which focuses on revamping the detail page as well as uniting the view for hosts and content hosts.

the test data. Also, my first impression is good. It looks complete but not overwhelming.

I do wonder how it will change if certain plugins are unavailable. Is there some version where the cards are labeled to their plugin? For example, Host collections, errata and content views belong to Katello. Recent jobs is REX. That means on a vanilla Foreman, the third column is empty. Do cards shift there to fill it?

On today’s dashboard (which by no means is an example of how it should behave), it is possible to close some boxes. Is that something that’s been considered?

Small detail, but the Power on feels a bit odd to me. I feel that’s closer related to a Host status. Is there also an action related to it to turn it off?

The Last Config Report feels like it also deserves a warning. Here it’s 6 days ago and if it’s Puppet, then it’s out of sync and that is a warning. Has this been considered?

For audits, I think the date is also useful to have and I don’t see that now. I feel like the current example doesn’t tell me much about how that will be filled. Speaking of that, how is recent defined? Last x period, last x changes or combined into last x changes from the past x period?